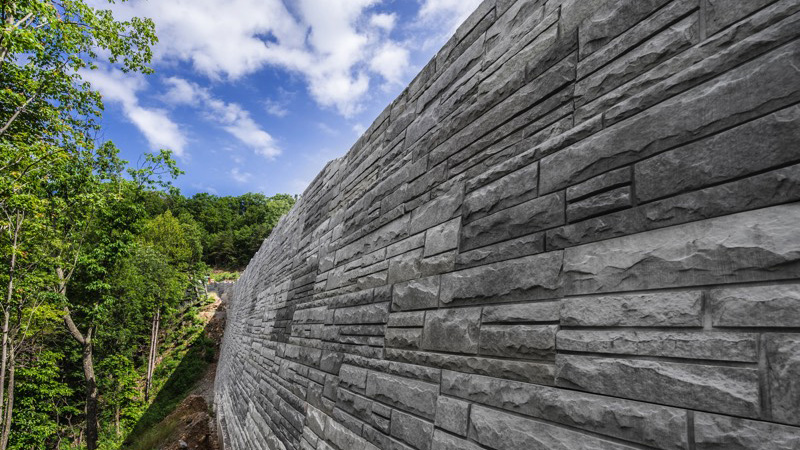 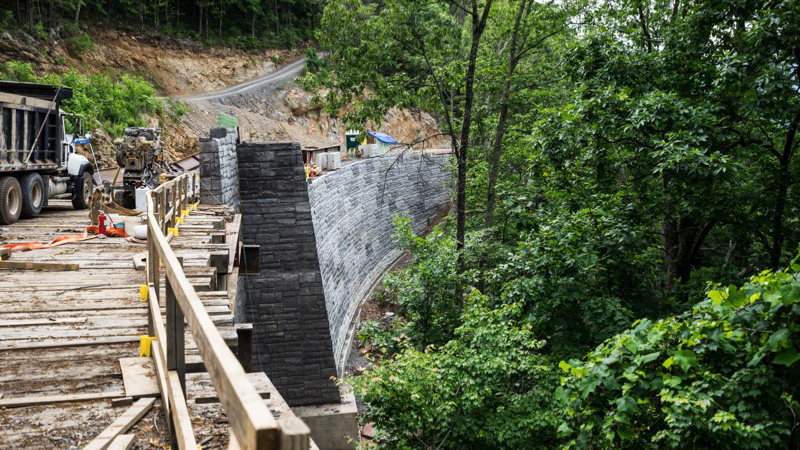 Situated in the foothills of the Great Smoky Mountains in Walland, Tenn., is a 72-mile scenic road that’s home to a construction project that will soon link together two beautiful, picturesque road segments into a single stretch known as “Foothills Parkway.” About 1.65 miles in length, the road project that’s underway will fill in a gap in the parkway that’s been extremely difficult for previous construction crews and engineers to navigate and work on. The area’s ravines, rocky ridges, tight tolerances, and steep terrain have all made the project nearly impossible…up until now.

“We’re dealing with very difficult terrain and extremely strict requirements – all the while trying to create minimal disturbance to the natural surroundings,” says Project Engineer and Designer Robert Saunders. “These are project goals that the National Park Service holds very highly, and that we had to adhere to when designing this especially intricate part of the parkway.”

Started in 2010 and on track to be completed by 2017, the job site is home to a team of engineers, designers, and contractors who are spending seven years completing a road project that includes blasting, excavation and grading, concrete, and the construction of bridges and retaining walls. To make the latter, Saunders specified Stone Strong Systems’ precast wall system.

Manufactured by NPCA member C.R. Barger & Sons, Inc., of Lenoir City, Tenn., the 14 precast walls will span over 80,000 square feet and reach over 70 feet in height. “I had used Stone Strong on a previous project in Maryland,” says Saunders. “The product made sense for this application, based on the tight tolerances, the rugged terrain, and the aesthetic appeal that made the product fit well with the natural surroundings.” On the economics side, Saunders says the precast wall system was extremely versatile and fit well with the site’s steep terrain and its varied wall height requirements.

For the project, C.R. Barger spent months pouring the 24-square-foot blocks every day, according to Eric Barger, Vice President. The precaster is currently finishing up its aspect of the project, which will be completely finished in 2017. To assure a good match with the region’s beautiful, natural topography, a liner was used as a tool for replicating an existing stone finish.

Thomas Meador, Assistant District Manager at The Lane Construction Corp., in Salisbury, N.C., said that installation of the precast walls has been “fairly easy” due to the fact that every block fits with the next in a puzzle-like manner. “Once the ball started rolling with the installation, the rest of it was pretty straightforward,” said Meador, “despite the fact that we’re working in rugged terrain on the side of a steep cliff.”

Precast: The Material of Choice
According to Saunders, Stone Strong was an especially good choice based on the high wall heights that exceed 50 feet. The product was also a good fit for use in an area where high elevations, a narrow construction corridor, and precise aesthetic requirements create daily challenges for the construction crews.

Saunders says the Stone Strong system was selected based on a combination of requirements, both aesthetic and economical in nature. “Economics obviously applied on the construction side,” says Saunders, “but even more critical were the National Park Service’s extremely strict aesthetic requirements regarding how the new wall would match the existing architecture. We needed a suitable system that would work within those requirements.”

Meador concurs, and says his firm’s $48 million contract includes the construction of a 2-lane roadway and five post-tension bridges that will connect the “missing link” in the Foothills Parkway. Commissioned by Congress in the 1940s, the parkway is part of a 7-park national parkland initiative that has yet to be fully completed. “When we’re finished, people will be able to enjoy 72 full miles of national scenic road,” says Meador. To achieve that goal, the contractor was asked to use a minimum block size of 2’ X 4’ – a specification that limited its material choices.

“That stipulation regarding the large block size brought us to Stone Strong as an option,” says Meador. “Because the product was available in such large sizes, it was a good fit for this particular application.” In addition, the block would allow The Lane Construction Corp., to use a fractured stone finish that would help the wall blend well with its surroundings and any existing structures. The post-tension bridges that are currently in place, for example, feature a stone finish that “had to be replicated by using the block,” says Meador.

“We had to come in and do a laser scan of the existing stone finishes and then formulate a liner that C.R. Barger & Sons used to make the Stone Strong blocks,” Meador explains. “That was a pretty involved process that really adds to the aesthetics of the project.”

Complying with Strict Requirements
In addition to the 48-foot walls that were part of the parkway project, C.R. Barger & Sons also manufactured block for a double-tiered section that, once in place, stands over 70 feet tall. “For that tall section, we’re using a 30-foot-tall structure that steps in about 15 feet and then reaches all the way up to 70 feet in height,” says Meador, whose crew is pleased with Stone Strong’s straightforward installation process. “Because the blocks fit easily together, we’re able to handle the extremely tight tolerances while keeping everything plumb and flush on the facing side.”

In fact, Meador says that “getting out of tolerance” is nearly impossible with the Stone Strong walls, which feature loops and slots for precise installation. “Once we put the first few in place, the rest of them were pretty easy to install,” says Meador. “We really didn’t have to worry about the tolerances, additional reinforcement, or the fact that we were working on the edge of a fairly steep cliff.”

To meet the demands of the project, Barger says the precaster ramped up production to the point where it was pouring about 28 blocks every day. To comply with the National Park Service’s aesthetic demands, the precaster had to mix integral color in with the concrete – an extra step that required much attention to detail and time.

In addition, the precaster had to maintain some extremely tight tolerances. “Every block gets measured/quality control across 12 different locations,” says Barger. “To say tolerance was a really big deal on this job would be a major understatement. Put simply, every single block had to be absolutely perfect.”

The fact that each block had to meet the owner’s minimum strength requirement of 4,000 PSI added more complexity to the precast manufacturing side of the project. “If the blocks didn’t meet that requirement it could spell bad news for everyone involved, and namely because of the extremely high wall height,” says Barger. “The blocks had be reinforced to the point where they met those requirements.” Once C.R. Barger & Sons factored the various project requirements into the equation, the precaster was able to start producing the Stone Strong blocks at a fairly rapid pace – all the while maintaining a sharp eye on quality and aesthetics.

Barger credits the liner with helping to create the aesthetic appeal and “look” that the National Park Service was striving for. “It ensured that the wall looked like and blended in with the existing wall infrastructure,” says Barger, who adds that Stone Strong also contributed economically to the project. “Because we built the blocks in a quality-controlled environment, and because the installation was seamless, the overall project costs were positively impacted,” says Barger. “To be honest, I’m not sure if casting in place would have even been an option, given the environment that the contractor is operating in.”

For Current and Future Generations to Enjoy
Looking back on the last five years that his company has worked on the “missing link” in the Great Smoky Mountains, Meador is pleased to say that not only is the project going well, but it’s also moving in a direction that will benefit future generations of hikers and outdoor enthusiasts. “My wife, son, and I are all avid hikers,” says Meador. “We love the Smoky Mountains and it’s in our best interest to create something that everyone can love and enjoy for generations to come. It’s great to be a part of this effort.”

So far, Meador says the overall project has gone “very well.” The National Park Service is pleased with the progress, he says, and particularly enthused that the new wall is as robust as it is aesthetically pleasing. “We’re having to keep the aesthetics in mind as we work through this 7-year project, and the Stone Strong wall definitely played a part in helping us do that,” says Meador. “This is definitely a signature project for Lane Construction and for C.R. Barger and Sons as well.”