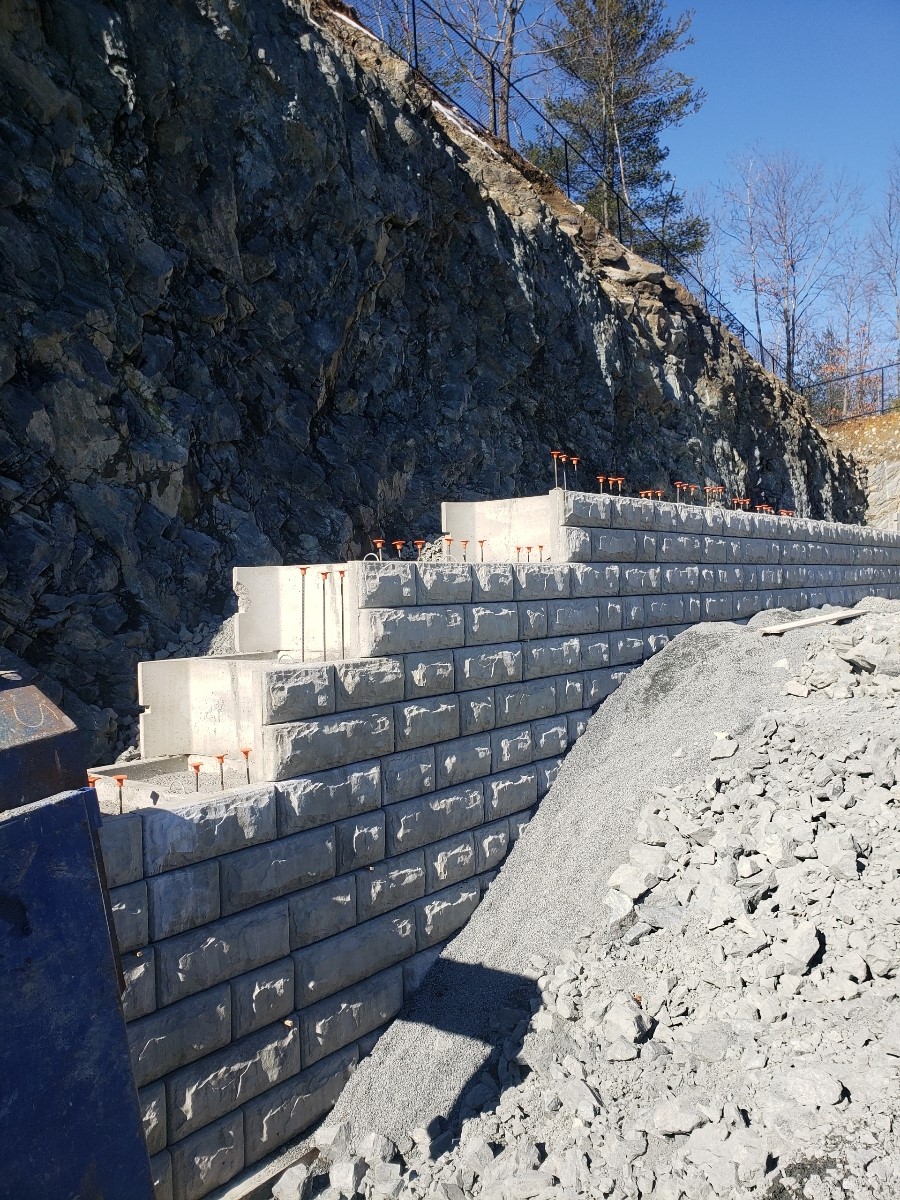 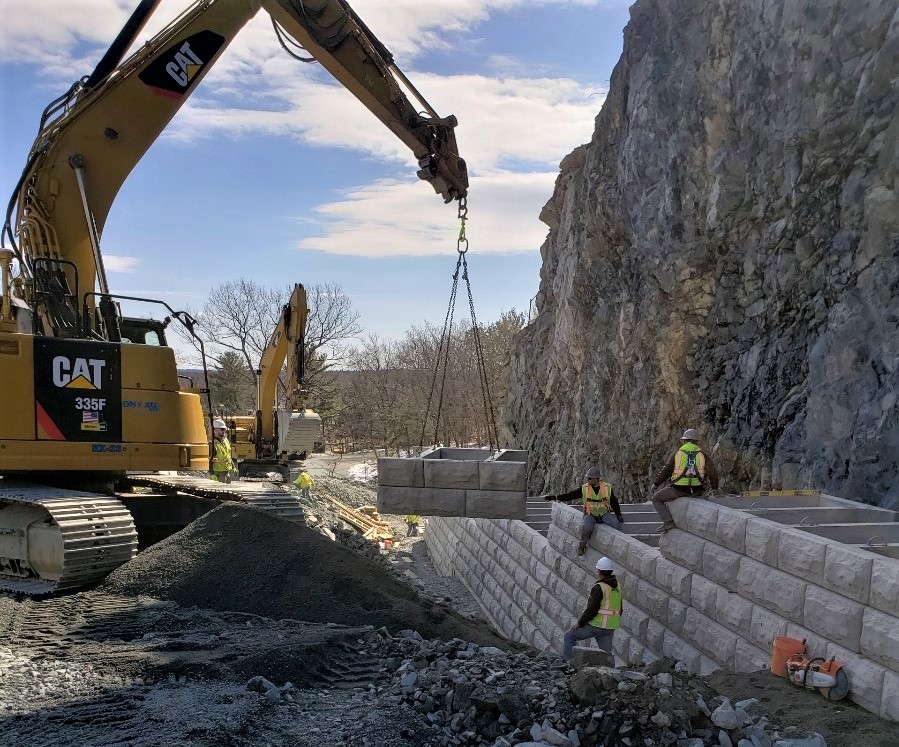 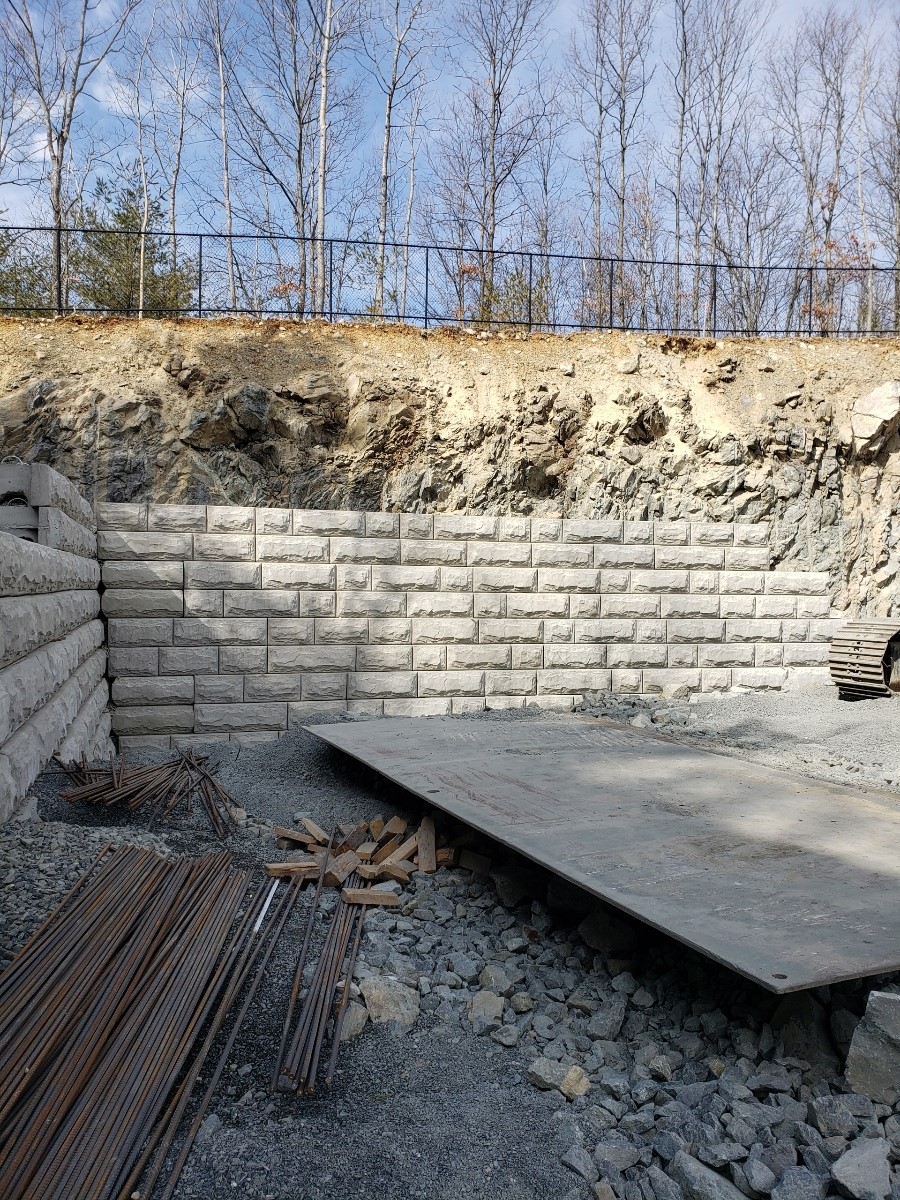 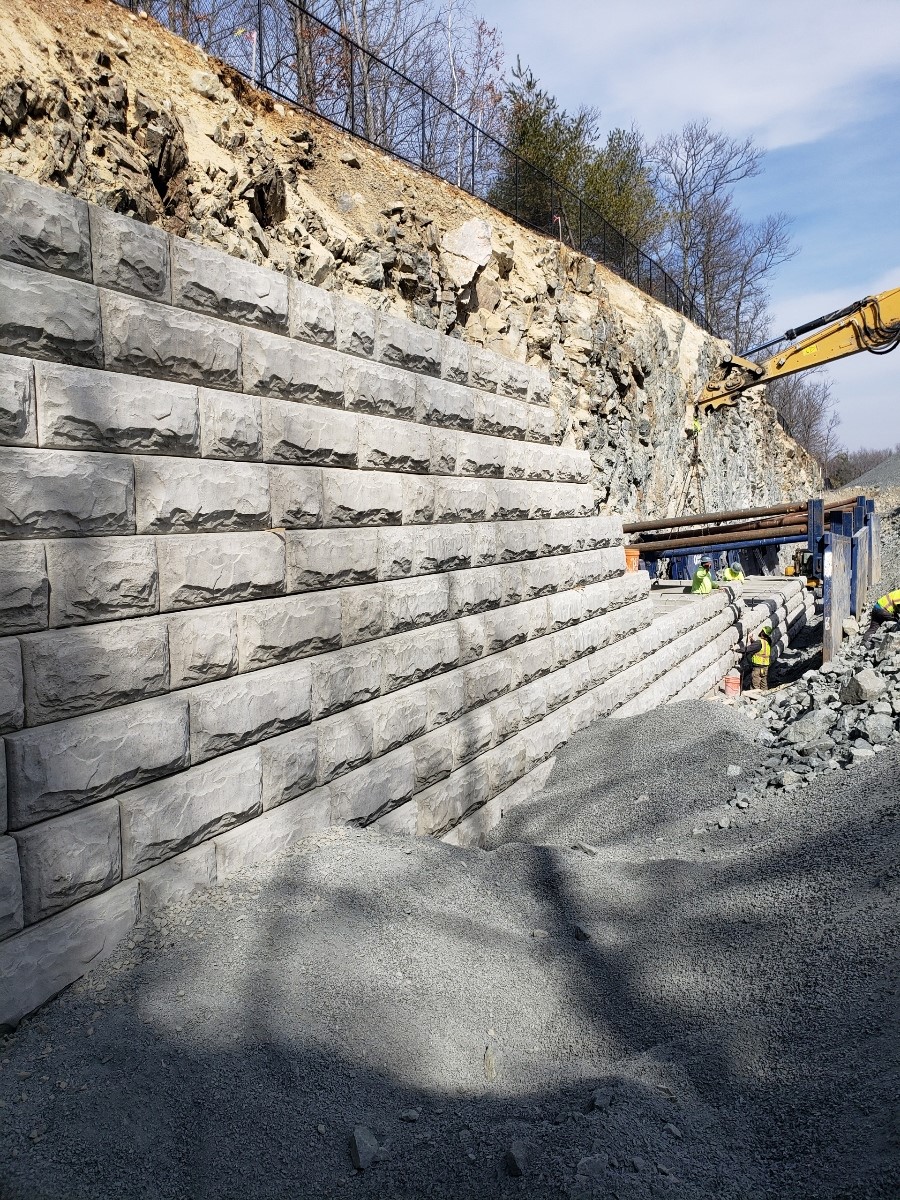 The uniquely engineered concrete guardian is being constructed by Onyx Corporation of Acton, Massachusetts, as part of the site work for the 12-acre project. John Durkin Jr., Onyx Operations Manager, is overseeing the project while day to day activities at the Woburn site are managed by TJ Carroll, General Superintendent – whose focus is the construction of the Stone Strong wall – and George Clyde, General Foreman, who manages a huge blasted rock crushing operation at the site.

A Different Type of Block

Stone Strong modular blocks differ markedly from other wall systems in their size. Block facades vary from 3 square feet to 24 square feet – the largest being the 24-86 units, which have an 8-foot by 3-foot face and a width of 7 feet, 2 inches. More than 60 percent of the blocks used on this job consist of the massive 24-86 modules that together provide more than 75 percent of the total wall space. The blocks have an architectural façade that replicates the look of granite hand-chiseled by artisans.

“Our understanding is that this is the largest single-block wall ever cast by MBO,” said Durkin. “The tallest section is being filled with concrete. Vertical steel rebars reinforce the concrete, and there will be a capstone top with rock anchors tied to the existing rock mass for safety.”

The tallest part of the wall lies on a 216-foot-long section of the West Wall. This section of wall was originally designed with a maximum height of 48 feet but was raised by an additional course of Stone Strong block to a maximum height of 51 feet for added safety. Each 24-86 block in this section contains concrete infill and five #6 rebars placed vertically. Moreover, each rebar overlaps a rebar in the block above and the block below it, establishing continuity of steel reinforcing for the full height of the wall. However, the blocks in the lower wall sections have crushed blasted rock infill instead of concrete.

Carroll said the hardest part of this job is the wall's concrete footing requiring additional safety steps. “We had to install trench boxes over each block to keep the guys safe from falling rocks while they were building the footings,” he said.

About 1,600 cubic yards of concrete was supplied for the entire wall footings and block infill by Kane Perkins, while Independent Concrete Pumping pumped all of the ready mix to the placement crew.

Once the footings cured, the Onyx crew began assembling the Stone Strong wall. The blocks were stacked with a 4-inch setback for each course, creating a batter profile that closely matches the slope of the presplit rock face.

The space between the existing rock and the new wall is backfilled with crushed blasted rock. This material is plentiful because the 12-acre development is located on what was formerly a 50- to 75-foot-tall hill comprised mostly of granite, that was blasted down to grade by Maine Drilling & Blasting (MD&B). Matt Shaughnessy was MD&B's Blasting Superintendent for the drilling and blasting of some 450,000 cubic yards of rock.

According to Clyde, the project started in March 2019 with an Onyx crew operating Caterpillar 345 and Caterpillar 330 Excavators to strip off overburden, allowing the MD&B crew to begin drilling blast holes. MD&B started blasting in April 2019. The blaster pre-split the face of the existing hill, a technique usually employing lightly charged, close-spaced holes to create a fracture plane along a specified profile. This is most often done before production blasting to create a secondary fracture plane that will protect the final slope face from damage in the main production blasts.

Up to three Epiroc top-hammer surface drills – a T30, T40 and T45 – were used to drill blast holes by the crew, who were based in Milford, Massachusetts, one of many MD&B locations. Clyde pointed out that since the project is located right off Route 38 with a residential neighborhood nearby, two relatively small blasts were typically executed each day.

All of the blasted rock is being crushed on site under Clyde's management. The operation stretches out for more than a hundred yards, starting with the feeding of large chunks of blasted rock by a 70-ton Caterpillar 374F Excavator with a 6-cubic-yard bucket. Two scoops from this behemoth fills a 10-wheel dump truck. Clyde indicated there are several mobile crushing and screening machines set up in series that can be rearranged to yield many different types of product. At the time of this coverage, for example, the Caterpillar 374F Excavator was depositing blasted 2-foot by 2-foot rock into a Power Screen Premier 600 Track Jaw Crusher. This reduced the rock to 6-inch minus material that was fed into a Metso Loco Trak GP300 Cone Crusher. The 3-inch minus material emerging from the cone crusher was conveyed to a McCloskey R155 Scalper/Screener, producing 1-1/2-inch dense graded rock with fines.

Depending on which system of screens and crusher combinations are used, a second possible output is 1-1/2-inch to 3-inch stone, which goes into a Metso Loco Track HP 300 Cone Crusher resulting in 1-1/2-inch and 3/4-inch crushed stone and stone dust. And finally, the material is fed through a Power Screen Horizon 6x20.

A May Finish for the Woburn Wall

The various end-products of the elaborate crushing procedures are either used on site or sold to commercial customers. Durkin said that crushed stone sales revenues have offset the cost of drilling and crushing the massive amount of rock that had to be removed for the new development and its protective wall. He added that when the wall is finished in May 2021, it will be among the largest and tallest free-standing block wall structures in New England.